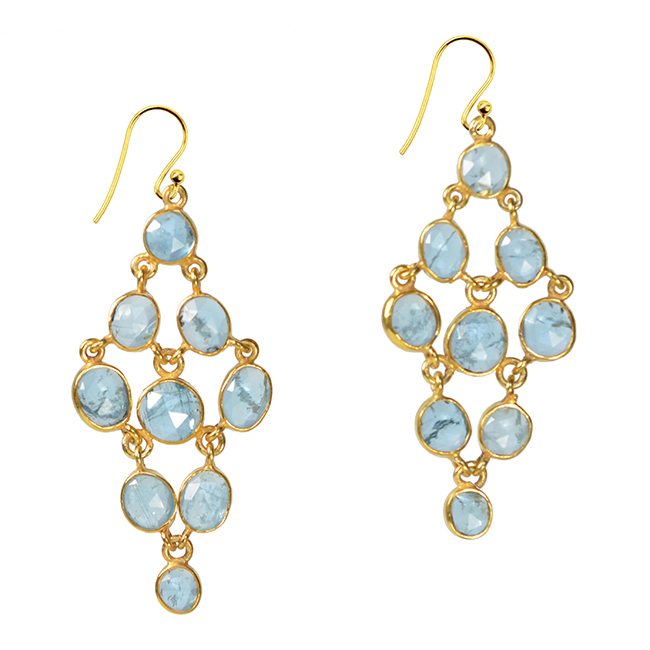 Precious stones have held a special place in literature since the beginning of writing and a special place in the human psyche for much longer than that. Gemstones are so shaped by the meanings and values we have placed on them through the centuries that the stones are no longer just precious and beautiful jewels but a reflection of ourselves and our past. We may not all understand the deeper meaning of every stone but we often have an instinctive knowledge of a jewels meaning in literature and art, for example we associate diamonds with longevity or rubies with love.

Here at Sushilla we believe the beauty of our semi-precious jewellery extends much deeper than their immediate sparkle to the layers of meaning underneath. We know that understanding the stones we use to craft and design our jewellery adds special significance to every piece. We have delved into the history of gemstones in literature to help you find you own special meaning in the jewels.

Many ancient cultures created their own meaning and folklore around gemstones. They are mentioned in surviving writings and carvings from Ancient Egypt, Rome and particularly from the Ancient Greek philosophers such as Pliny and Aristotle. Although all ancient cultures had symbolic, ceremonial and status associations for gemstones it seems to be the Greeks who first strived to discuss and uncover the clear meanings of these jewels. In fact, the first acknowledge writing on this subject was by an Ancient Greek writer Theophrastus whose treatise ‘On Stones’ partially survives today and is thought to be the basis for many historical Lapidary’s – a text uncovering the meaning and uses of gemstones. Gemstone enthusiasts still refer to Lapidary’s today.

Perhaps the most beautiful and ancient quote comes from Pliny, who wrote:

“There is in them a softer fire than the ruby, there is the brilliant purple of the amethyst, and the sea green of the emerald – all shining together in incredible union.  Some by their splendour rival the colours of the painters, others the flame of burning sulphur or of fire quickened by oil.”

Here Pliny is describing the qualities of the opal, but is in fact using a literary tool we are still utilising today. Modern writers often use the beauty of gemstones to reflect the beauty of what we see in the world around us.

In Hebrew and Christian lore described in the Book of Exodus in the Old Testament the high priests of Israel wore a breastplate made up of twelve specifically chosen gemstones each with a special meaning. These stones have been interpreted to include ruby, topaz and amethyst. It is indicated that this special breastplate was used to make religious decisions. The text is very specific in the construction of these breastplates and translation of the stones used has been long argued. In Exodus 28 :30 it the making of the breastplate is described.

“Fashion a breast piece for making decisions—the work of skilled hands…Then mount four rows of precious stones on it…There are to be twelve stones, one for each of the names of the sons of Israel, each engraved like a seal with the name of one of the twelve tribes.”

In the Book of Chronicles, King David is also anointed with a crown of gold and precious jewels along with many other Biblical references throughout the text regarding precious and semi-precious stones being used to celebrate the glory of the Christian and Jewish God. The stones here are used as a reflection of religious magnificence and a way to worship a higher power. However, there are also deeper meanings associated with individual stones such as jasper representing purity and light and onyx representing strength. Through this network of symbolism, the stones referred to in the Bible allow for layers of meaning and interpretation in the text.

The use of precious stones in religious texts exists not only on the Bible but also in important Hindu, Islamic and other religious writings. The ability of semi-precious and precious stones to convey a deep and meaningful message is one that resonates across religious boundaries.

Shakespeare is still the most famous and revered of English writers, his work living on and performed, centuries after his death. He used jewels and gemstones as a symbolic reflection of his character’s feelings and the themes of his plays. He also played on his audiences understanding of accepted symbolism of gemstones to express ideas that would be familiar to them.   In Troilus and Cressida, Helen is described as a pearl in this line:

“Is she worth keeping? Why, she is a pearl

Whose price hath launched above a thousand ships,

And turned crowned kings to merchants.”

Here Pearl is used not only to symbolise a woman of great beauty but Shakespeare is playing with ideas of the material worth of women and their value as an object, this line is said by Paris and is heavily laden with sarcasm.

Similarly, in Twelfth Night Feste compares Duke Orsino to an Opal in this line:

“Now the melancholy god protect thee; and the tailor make thy

doublet of changeable taffeta, for thy mind is a very opal!”

The reference to opal may mean little to modern audiences but is in fact a reference to the fickleness represented in the opals changeable sheen.

Poems are the ideal vehicle for writings about gemstones. The complexity of the stones, their layered meanings and innate beauty has led to some of the most wonderful and moving poetry ever produced. In fact, some gemstones have become so intertwined with poetic phrases that they have become accepted descriptions, so we have ‘ruby red lips’, ‘emerald seas’ and eyes that ‘sparkle like diamonds’ as part of our everyday speech. There are so many examples of poetry showcasing the brilliance of gemstones that it is hard to narrow down only a few examples to share.

In Lord Byron’s touching ‘I Saw Thee Weep’, sapphire is used to add depth to the description of beauty:

Came o’er that eye of blue;

And then methought it did appear

Beside thee ceased to shine;

It could not match the living rays

That fill’d that glance of thine.

As clouds from yonder sun receive

A deep and mellow dye,

Which scarce the shade of coming eve

Can banish from the sky —

Those smiles unto the moodiest mind

Their own pure joy impart;

Their sunshine leaves a glow behind

That lightens o’er the heart.”

Whereas in ‘I went to Heaven’ by Emily Dickinson, ruby is used to create a sense of other worldliness:

‘T was a small town,

Lit with a ruby,

Stiller than the fields

At the full dew,

‘A Farewell’ by George William Russell reminds us how deeply gemstones can be connected with emotion:

“ONLY in my deep heart I love you, sweetest heart.

Many another vesture hath the soul, I pray

Call me not forth from this. If from the light I part

Only with clay I cling unto the clay.

And ah! my bright companion, you and I must go

Our ways, unfolding lonely glories, not out own,

Nor from each other gathered, but an inward glow

Breathed by the Lone One on the seeker lone.

If for the heart’s own sake we break the heart, we may

When the last ruby drop dissolves in diamond light

Meet in a deeper vesture in another day.

The 18th century saw the birth of the novel as we know it today, a longer piece of fictional writing that explored ideas and themes as part of a clear story. From the early days of the novel gemstones have featured often creating a sense of the exotic, the unknown or otherness with gemstones being linked with foreign lands. Wilkie Collins’ ‘The Moonstone’ tells the tale of a large and valuable diamond that goes missing. One our narrators in the story, Betteridge, tells us:

“I am asked to tell the story of the Diamond, and, instead of that, I have been telling the story of my own self. Curious, and quite beyond me to account for”

As is Shakespearean and poetical references to gemstones the feeling is in this novel that precious stones are a reflection of people, that their meanings and symbols are strongly linked to how we view ourselves. Gemstones in literature are a way to explore the meanings of people as much as the meanings of themselves.

The popular Sherlock Holmes series of short stories written by Arthur Conan Doyle also used the idea of a gemstone in relation to a search or a prize. In ‘The Adventure of the Blue Carbuncle’ Holmes and Watson are uncovering the mystery of a large blue jewel.

The idea of Jewels continues to captivate modern readers. In Phillip Pullmans ‘The Ruby in the Smoke’ 19 year old Sally Lockhart is pulled into a world of Victorian mystery and intrigue involving a cursed Indian diamond and her search for the truth about her mother.   The ‘Ruby in the Smoke’ is not only about the fate of a precious jewel but also represents the search for the heart of Sally, her background and origin. The precious object is simultaneously human and physical and shows that the use of gemstone imagery is just as powerful today as it ever has been.

The allure of gemstones seems likely to captivate writers forever, with modern audiences remaining moved and enthralled by images of these beautiful stones and the depth of meaning associated with them. After centuries of their importance in our lives and depiction in our literature it seems our obsession with gemstones is here to stay.

Explore our collection of handmade semi-precious jewellery to find a stone that is as inspirational to you as it has been to centuries of writers. It seems apt to end with a quote and this one from George Elliott sums up our feelings on gemstones pretty perfectly.

“These gems have life in them: their colours speak, say what words fail of.”